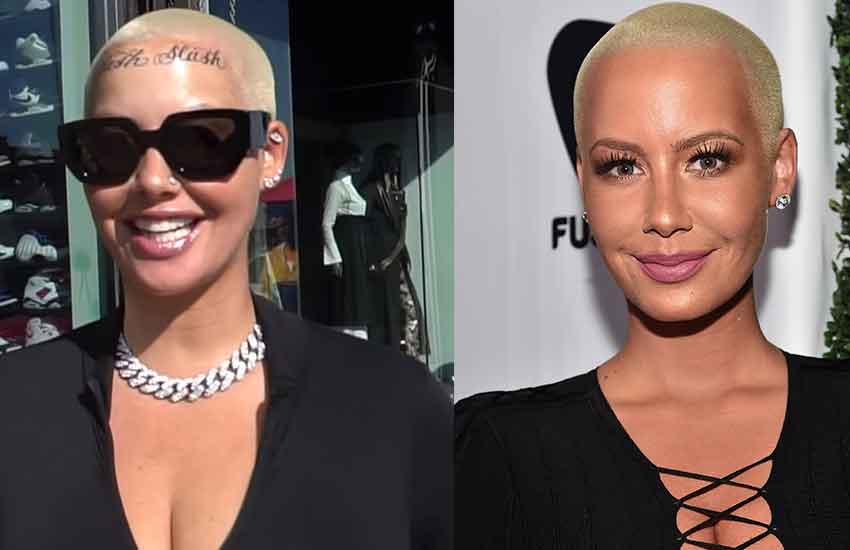 It is no news how mothers go extra miles just to shows how much they love their children, Amber Rose was not left out as she showed just how much she adores her boys.

The 31, model, was seen with a new tattoo in her forehead but is yet to post it on social media.

Her ink reads “Slash” on one side of her forehead and “Bash” on the right-hand side.

It’s a clear tribute to her boys, four-month-old son Slash and six-year-old Sebastian, who she calls Bash.

Both their names are written in cursive and sit just underneath her hairline, directly at the top of her forehead.

She shares her oldest child Sebastian with her ex Wiz Khalifa.

The mum-of-two took to Instagram to say her plastic surgeon was “sucking the baby fat” out of her body.

Wearing her hospital outfit, the mum-of-two explained: “So I’m here at Dr. Matlock’s office and I’m about to get my whole body done after the baby, and if you wanna get your body done or you need some work done… he’s gonna take out some of my jowls that just like, hereditary, runs in my family, so he’s gonna fix that.

“And he’s gonna suck all the baby fat out of my stomach. I’m about to go in this morning and I’m super excited.

“I’m gonna tag Dr. Matlock so if you wanna hit him up and get some work done, hit him up.”

Amber experienced extreme nausea during both her pregnancies, which has also affected the likes of Kate Middleton and Kim Kardashian.

Following a statement from her lawyer, Anne Heche, who was involved in a terrible car accident on August 5 that left her...

Anne Heche’s Life Support taken off, she dies at 53.