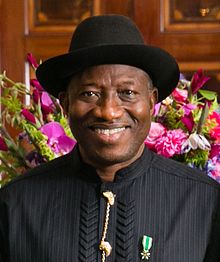 Former Nigerian president Dr Goodluck Jonathan had being accused of betraying the peoples Democratic Party during the just concluded governorship election in Bayelsa State. A group identified as  Peoples Democratic Party (PDP) Elders Forum made this claim in a statement released by it’s chairman, Chief Benson Odoko.
According to  Daily Sun, Odoko claimed it was not debatable that the former president  worked against the party that made him deputy governor, governor, vice president and president of the country.
He made reference to Jonathan’s recent visit to President Muhammadu Buhari at the Presidential Villa in Abuja as well as the reception of APC leaders in his house after the election result was declared as evidence that Jonathan worked against the PDP.

Odoko also claimed that Jonathan distanced himself from the PDP in the buildup to the gubernatorial election.

Odoko further claimed that Jonathan and his wife, the former first lady, donated the Aridolf Hotel to the APC as the operational contact point for visiting dignitaries of the party and as the venue for the party’s primaries.

He later called on PDP leadership  mete out disciplinary actions against Jonathan for his role in the PDP’s defeat in the state and for openly celebrating an opposition victory against the party which made him president.
Meanwhile,  the spoke person of Peoples Democratic Party Kola Olagbondiyan has disclosed that the party had not decided on the matter.