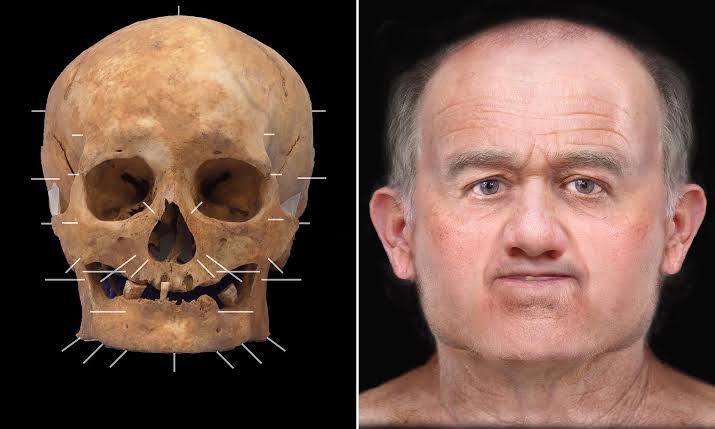 A face of a medieval man who dead 600 years ago has been re-created from a skeleton.

The Independent report that the remains were dig up along with almost 60 other full skeletons during excavations at Aberdeen Art Gallery.

Roundnews24 gathered that, a Facial recreation technology was done to produce an image of one man, known as Skeleton (SK) 125.

Experts from the Archaeology Group (AOC) believe that the man was over 46 years old, between 5ft 2in and 5ft 5in and suffered from extensive dental and joint disease.

Dr Paula Milburn, from the group, while speaking on this development, said:

“SK 125 has provided us with a first fascinating glimpse of one of the people buried on the site of Aberdeen Art Gallery over 600 years ago.

“The ongoing post-excavation work is examining the remains in detail and will provide us with amazing information on the kind of people buried here, including their ages, gender, health and lifestyles.” She added

Work on the redevelopment of Aberdeen Art Gallery started on 2015 but was temporarily suspended to allow for archaeological investigations, which have revealed insights into the health and lifestyle of those buried.

AFP reports that Apple stated on Tuesday that it would no longer manufacture iPods, the MP3 players. Apple said in a blog post...