HAHA!!!, UK police officer gets stuck in his own handcuffs in a training session, rescued by firefighters 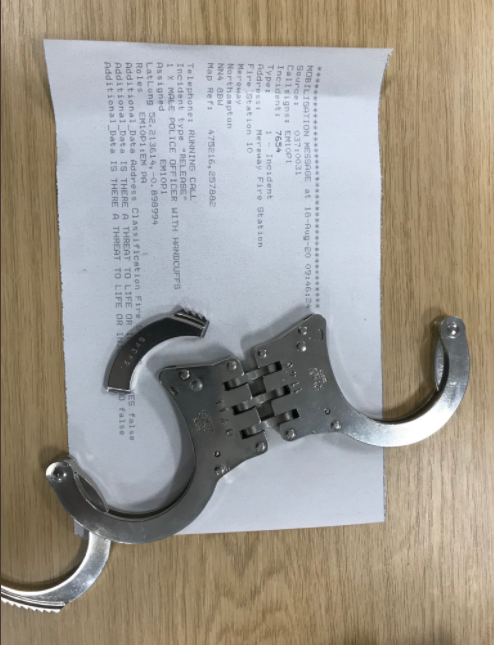 In an odd situation that has sparked laughter online, a police officer in England, United Kingdom, had to call for help after he got stuck in his own handcuffs.

Also, Read – How Nigeria’s React To The Photos Of Newly Acquired Ultra-Modern Trains Announces By NRC.

The incident which occurred on August 18, when Scott Renwick, the Core Training Sergeant was showing new recruits how to use hinged handcuffs. However, amid the demonstration, he himself got stuck in the handcuffs and had to walk over to the nearby fire station for help.

After cutting the cuffs, Northamptonshire Fire and Rescue Service reported the hilarious incident on Twitter and wrote, ‘Police Officer released from handcuffs after they had failed, used pedal cutters to release’.

Renwick, later himself took to Twitter site to share a picture of his handcuff and wrote, ”Well that wasn’t a good start to the day. Thanks to @northantsfire for cutting me out of some broken cuffs. #NotFunny. I would have laughed too!!”

The incident went viral on social media, eliciting funny reactions from people. In response to a tweet, he wrote, ”If I put a smile on a single face during these difficult times my job is done.”

Here are other reactions:

See German man who cuts off His ears & keeps them in Jar, spends ₦2.7m On 17 Body Modifications

Bizarre! 17-Year-Old Girl Gives Birth to ‘Surprise Baby’ on The Toilet, Claims She Didn’t Know About Her Pregnancy