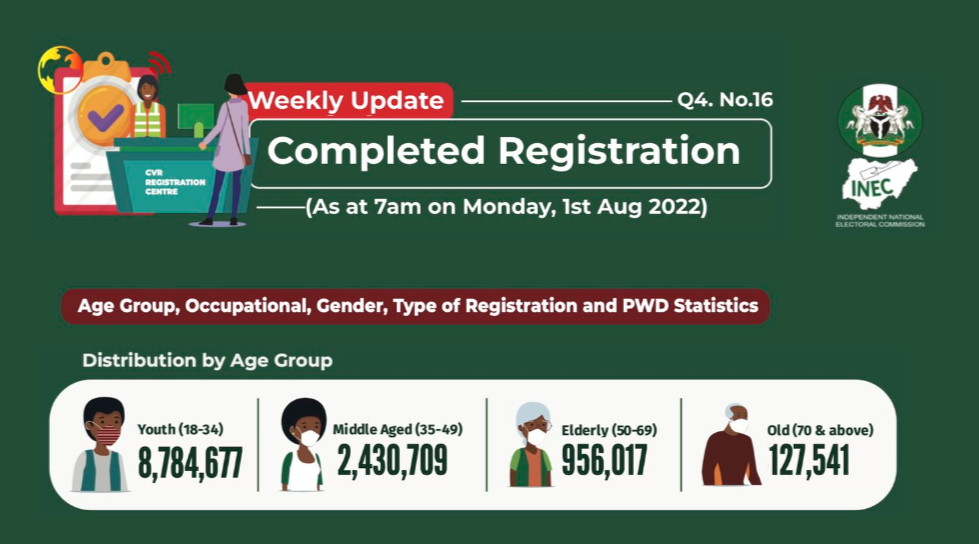 Meanwhile, INEC has cautioned Nigerians not to fall for fraudulent websites that advertise voter registration.

INEC announced in a statement signed by National Commissioner Festus Okoye that it has concluded its Continuous Voter Registration program for the 2023 general elections.

“Barely 24 hours after the suspension of voter registration, the attention of the Independent National Electoral Commission (INEC) has been drawn to an online site urging Nigerians to enroll for ‘VOTER CARD (PVC)’ registration claiming that the Federal Government has approved individual VOTER CARD (PVC) registration online to avoid unnecessary crowd in the ‘NIMC’ CENTERS,” the statement said.

“The Commission states unequivocally that the site is not linked to the Commission and the link/portal is spurious and from a dubious source.

“The Independent National Electoral Commission is the only body constitutionally and legally mandated to conduct the registration of persons qualified to vote in any election in Nigeria and to update and revise the register when the need arises. The Commission is solely responsible for organizing, undertaking, and supervising national elections in the country and does not share this responsibility with anybody or organization.

“Members of the public are strongly advised not to succumb to the antics of online scammers and should avoid such fake sites.

“The Commission has concluded the Continuous Voter Registration exercise nationwide and does not need to open an additional site or portal for the purposes of registration of voters.”

Apparently, Kim Kardashian and Pete Davidson have called it quits, a source close to the couple has said. According to E! News, the...

Salah and Nunez Save Liverpool On Opening Day