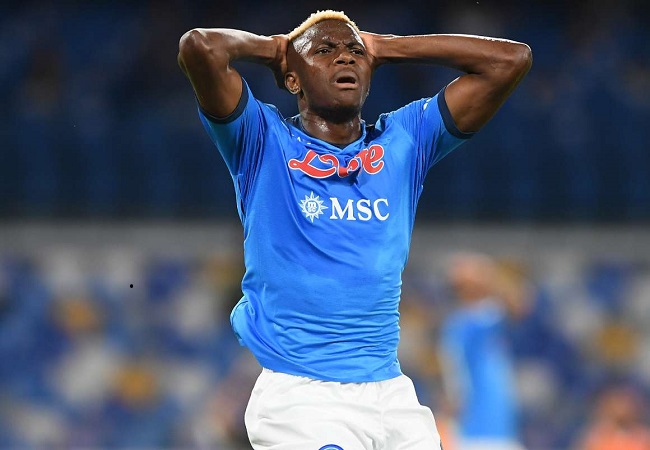 Nigerian international Victor Osimhen who is in the Super Eagles squad for the 2021 Africa Cup of Nations in Cameroon has tested positive for Covid-19, Goal.com reports.

The club confirmed the news confirmed on their official website, according to the statement Osimhen is asymptomatic and has begun a period of self-isolation, Napoli.

“SSC Napoli have announced that Victor Osimhen has tested positive for Covid-19 but is asymptomatic. Dr. Tartaro was due to perform a check-up on the player tomorrow,” a statement from the Serie A outfit read.

“Consequently, the local authorities have ordered that Osimhen self-isolate and the check-up will be rescheduled after he has tested negative and his period of isolation ends.”

This will be the second time the 22-year-old will be testing positive for the deadly virus within one year.

Following the announcement by the interim Super Eagles boss, Augustine Eguavoen, to call up the Osimhen as one of 28 players for the AFCON 2021 next month in Cameroon, there has been a disagreement between Seria A giants and the Nigeria Football Federation (NFF) on his match fitness.

The former Lille striker was involved in a horror head collision early last month during the Serie A encounter between Napoli and Inter Milan at San Siro.

He was substituted following a bad collision with Inter defender, Milan Skriniar, leading to double fractures in his eye socket and cheekbone.

Osimhen needed 18 screws and six plates to repair his broken face and was expected to be out for three months.

However, he returned to the squad with just 16 days on the sidelines – training with a custom carbon mask to protect his face.