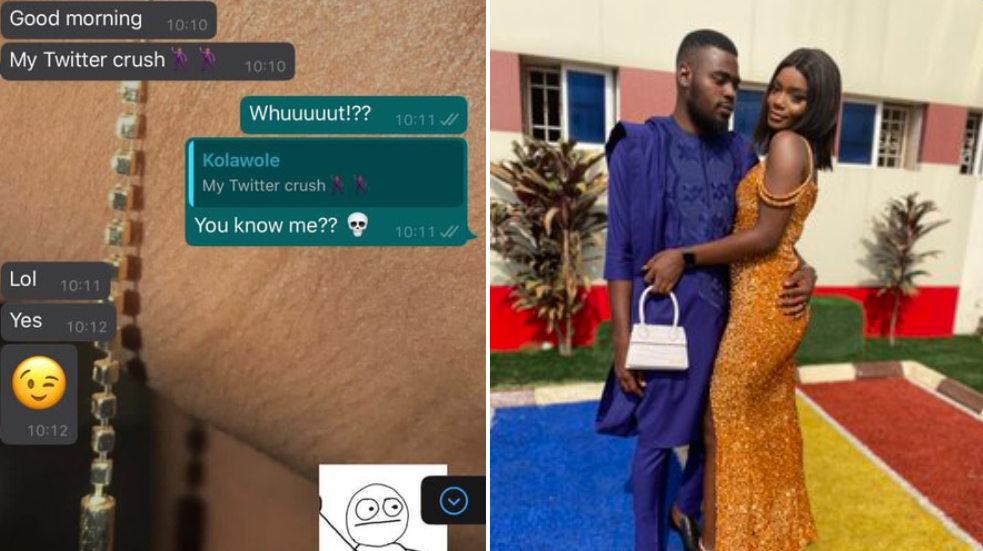 Nigerian lady falling in love with her Bolt driver, after shooting her shot

A Nigerian lady simply identified as Mokeji on Twitter has taken to the Microblogging platform to reveal that she made the first move at her Bolt driver and they both ended up dating him.

According to Mokeji, she was punished by the soldier in Benin city doing the lockdown for violating curfew. after being released, she requested a ride and it was her current man who arrived as the bolt driver.

How it started How it’s going pic.twitter.com/RvVOAmFhar

She disclosed that during the ride they didn’t talk, However, he started vibing after she played a song and it was at that moment she knew she had to make a move. Which they exchange contact and later massage him on Whatsapp, only to realize that the feeling was mutual.

“There’s curfew in Benin and I wasn’t aware. Soldiers use me catch cruise last night. From singing praise and worship to singing “jump like opolo” for one boy that was asked to do frog jump.”

“Had to put up in a hotel. So the next morning, I requested bolt and he was my driver. We didn’t talk all through the ride home.

”At a point, I played songs from my phone and he vibed. Naso I take decide say this one na my own o lol. Got to my house and asked if I could text him..

…cause I like him and he was like “okay let me give you my WhatsApp number”. That was how we started lol . I really hope it ends well”

A young lady has been dragged on twitter by religious folks when she made a tweet that promotes violence against public preachers. The lady...
Read more
Social media gist

A twitter user identified as @aderonmu_V_O took to his handle to seek financial help after his pregnant girlfriend delivered a baby girl. He claimed...
Read more
Social media gist

I’m at the verge of suicide – lady cries out for help.

A young lady identified as @junericc on twitter shares a heart-rending story of how she got kicked out by her parents after they found...
Read more