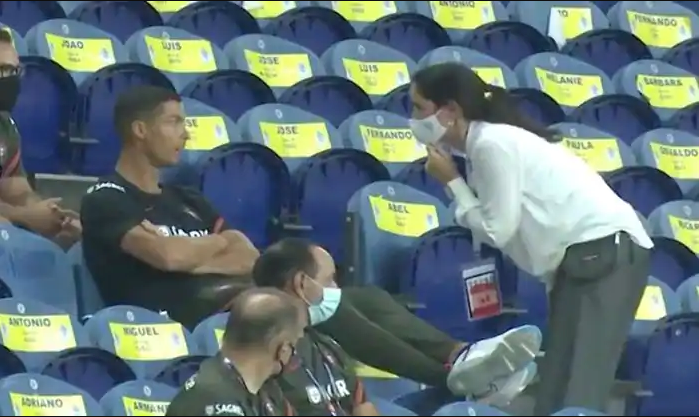 The Juventus star Cristiano Ronaldo had to be reminded to put a mask on as he was forced to watch his nation from the stands.

Ronaldo was ruled out of the fixture because of bizarre reason. Reportedly, it was a bee sting that forced him to stay out of the match., and was forced to sit in the stands as his nation claim a convincing 4-1 victory.

“I am very doubtful that he will be 100 per cent OK,” Portugal head coach Fernando Santos said during his press conference, according to The Sun.

“He had been training well, then suddenly on Wednesday one of his toes was red, as if he’d been stung by a bee. Now we have to wait. With an infection, you don’t know how long the recovery is going to take,” he added

During the game, Ronaldo unavoidably drew much attention after a stadium official was filmed approaching he to remind him to put on a mask as part of coronavirus protocol.

On being told, Ronaldo duly cooperated after been reminded and continued watching the match.