A Texas pastor has sued Kanye West for sampling his sermon on “Come to Life,” from 2021's Donda. According to TMZ, Bishop David Paul Moten...
Digital/Tech.NewsLocal 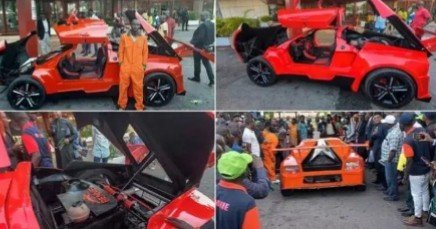 Nigeria as a country has been blessed with leaders of human and natural resources. In recent times, many young Nigerians have come out to demonstrate their talents. This is the case of a 25-year-old Nigerian engineer, Jerry Mallo, who  has successfully designed and assembled Nigerian first carbon fiber car which he named ‘Bennie Purrie.’

The new car was unveiled at Transcorp Hilton in Abuja on Thursday, 28th November where the governor of Plateau state, Simon Lalung, chaired the occasion.

Speaking on Channels Television on ‘Sunrise Daily’ on Friday after the unveiling of the car, the plateau born engineer said the car is not available yet adding that the first batch was only for testing and to notify the general public that such cars can be produced in Nigeria.
He then added that in 2 years' time, the car would be available at a cheap rate. In his words:

“In Europe, we learned that making the car is just half of the challenge, and selling it is the other half; Africa is usually is the target place to sell these vehicles, so I feel there’s a big market for it here.