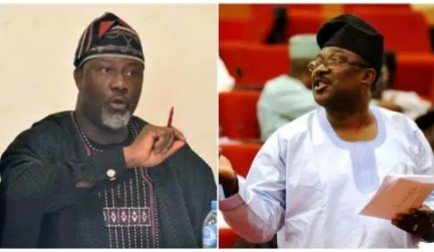 News reaching us now show that Senator Dino Melaye of the People’s Democratic Party (PDP) has lost his bid to retain his seat at the Senate as Smart Adeyemi of the All Progressives Congress (APC) has been pronounced winner of the Kogi West senatorial district rerun election Saturday.

Mr Adeyemi polled 88,373 votes while Mr Melaye recorded 62,133 votes, according to the result announced by the returning officer, Olajide Lawal.

The Independent National Electoral Commission (INEC) had a week ago declared the election inconclusive because the margin between Mr Adeyemi and Mr Melaye is lower than the number of “registered voters in 53 polling units of the 20 registration areas in the zone where elections were cancelled.”

After the initial election, both candidates had respectively polled 80,118 and 59,548 votes.

The margin of 20,570 votes between the two candidates was far less than the 43,127 registered voters in the 53 polling units where elections were cancelled. Hence, the rerun.

Mr Melaye rejected the results at the time.

Mr Adeyemi is returning to the Senate about five years after he lost the seat to Mr Melaye at the 2015 election.

NAN reported earlier today that a relatively large number of voters turned out on for Saturday’s supplementary poll.

Voters and INEC Staff started arriving polling units early in some of the centres.

A team of Policemen was also on the ground to keep the peace.

A voter, Malam Bala, 60, expressed satisfaction with the exercise and hoped it would not be “scattered again.